You Are Here: Home → 2021 → February → The Supreme Court overrules California

California shut down in house worship services, and the Supreme Court said, “Please, open back up if you wish.”  With the 25% capacity cap still in effect.  The conservative court did however, let California continue to ban singing and chanting at indoor services. 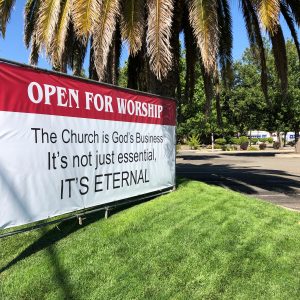 Though she didn’t go as far as conservatives wanted, the newest justice, Amy Coney Barrett joined her conservative colleagues in the majority while issuing  her first separate opinion.

“Of course, if a chorister can sing in a Hollywood studio but not in her church, California’s regulations cannot be viewed as neutral, but the record is uncertain, and the decisions below unfortunately shed light on the issue.”

California has a surge of Covid cases over the past three months.  At 3,402,000 plus, It has a million more cases than the next closest state, Texas.  It also has ten million more numbers in terms of population.

California does seem to have it in for churches compared to other gatherings, but maybe not.  At least the conservative majority of the Supreme Court think so.  This whole Pandemic  has been very interesting to watch the church react and counteract to the states reactions.  Historically the church and the state have come to blows since Constantine gave Christians official status in the Roman Empire.

Four years ago, I told some friends that the end of President Trump’s presidency was going to usher in a major battle between the two entities, and it appears in the last 3 months that is going to be likely.  The question is, how much do Christians fight for our rights, and how much do we bow our heads humbly and ask God to protect our stuff or our lives?

How we all react to these changes not only says who we are, but will also say what our world looks like in the next decade.

So do you think the Supreme Court made the right decision?