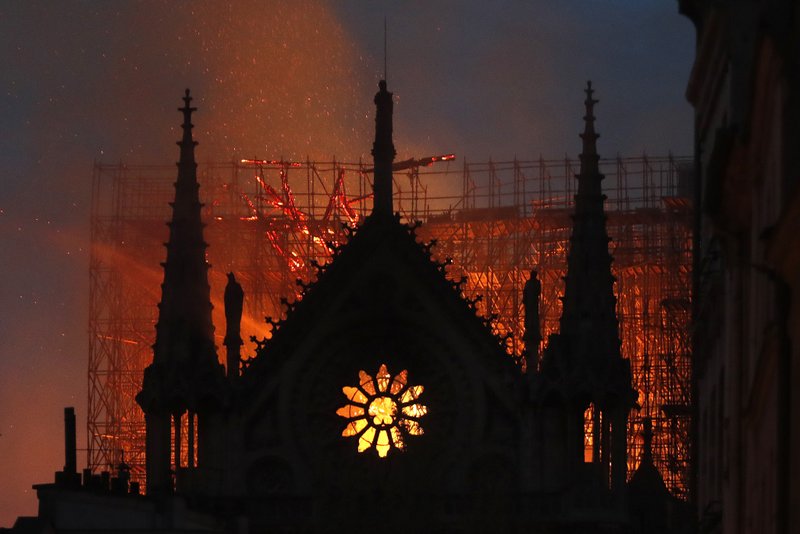 Tuesday morning I sat with a few friends and someone brought up the tragedy of the Notre Dame Cathedral burning down. Someone else hadn’t seen it, which was their way of telling us they had no connection whatsoever to social media. If they had a FB account they would have known immediately from their newsfeed that the famous architectural Catholic Church in Paris burnt to some extent to the ground. Many travelers, both past and present, to the beautiful city shared pictures and thoughts about their visit to the epic 900 year old man made bastion of Christianity.

As a pastor of a church with a building not quite as impressive as the Paris monument (exaggeration implied), I sometimes hated going to church knowing that quite possibly I would be walking into the odor of a skunk that had been attacked, or one of a million pipes that would be frozen and eventually when melting time happened, water would make its way across a carpeted floor. If those things weren’t enough, it was not uncommon for sewage to find its way out of the floor and into the women’s restroom, creating an unpleasant experience for any ladies who needed to use such a room.

So in 2013, after such an experience happened at 8:00 am on Easter Sunday, I expressed my desire to our board that it was my intention to move our church out of the building that housed us for the better part of 35 years and into a portable “wilderness type” scenario for a while. They agreed and over the next year, we planned and executed that decision, eventually moving our gathering place to a movie theater in April of 2014. Here are some of the lessons I learned from that move:

1. No matter what you do or what is true, some people look at the church as a building.

It’s an easy thing really to begin believing that the church you attend is the building you drive or walk to every weekend, but the fact that you only do that “every weekend” unless you’re old school and have a Wednesday night, should tell you everything you need to know about this fallacy. When the New Testament refers to the church, it almost always refers to the gathering of people as opposed to the place where those people go. And it’s not just the building people focus on, but also the city, town, or neighborhood in which the building exists.

When Fellowship Church moved from a town of 14,000 to a larger metropolitan area of Worcester (pop. 200,000), I was told by a congregant they could not make the move because their would no doubt be needles from heroin users sticking out of the seats at the theater we would be moving. I didn’t respond by saying that was hogwash (though it certainly was), but shared how we are called as a church to reach different people, so if we were confronted with some of those difficulties, we would have to move outside of our comfort zones.

2. Hard work brings people together and then tears them apart.

There’s nothing like hard work to bring people together. And putting together a church every weekend in a portable way is very hard work. Portable sounds like an easy word, but when it refers to a church service, it most certainly is not. Each weekend 15-40 people gathered together, worked hard, and accomplish a mission of putting up the church so that people could hear the gospel.

3.5 years into it, I realized the church leadership we had merged with didn’t have the passion of us getting into a building that those of us who were setting up every week had, so I started talking to my wife about us making a move, but she wisely told me that I led the church into the wilderness and we should stay in it until they moved into the promised land. 5 years later and I finally found a building for the church. Most of the people who helped move “church” in and out of the theater 5 years earlier were no longer there and certainly no longer helping (with the exception of a very few families). This is to say that eventually the wear and tear is too much for people to do the move in thing week in and week out. The hard work brought many people together, but eventually would tear them a part.

3. The building is more about stability than it is a symbol.

In Scripture, the temple is a symbol that God desires to live in the presence of His people. It is one of the four foremost symbols of the Jewish people in Biblical times. In America, though some attempts are made at such a reverential structure, most buildings are about stability as opposed to symbol. Stability can be important. I have two adopted kids, and a stable environment is essential to their well being. Unfortunately stability can also become a god and churches can hover inside their comfort zone to a fault, eventually rendering them useless as a movement.

4. You’d be surprised who loves the church building once you decide to move.

The original church I began attending and working at in 1999 started in 1978. It was pieced together by a group of people who loved God, were very fundamentalist, and who enjoyed wearing suits and ties to every service. When we made the decision, many of those people, many of whom I had never met before, felt the need to let me know through social media and drop by visits, how much they loved that “church”. Two of them I even responded with, “Then why didn’t you still attend it?” But the truth is, people love their memories. I get this. I love memories too. I am a HUGE fan of Hallmark Christmas movies for this very reason. But these people came out of the woodwork to share with me, some polite and some not, what the church building meant to them.

Five years after the fact, I understand what they meant. I too loved that building and all its faults. I spent many of my growing up (20’s and 30’s) years living, going to church, and working in that building. I think back to my time in that building and love what God did there both in my life and in the lives of others. But times change and I believe we made the right decision moving forward. There’s nothing wrong with looking back, but being locked in a cage of the past is where no successful person has ever lived.

5. The church will outlast any building in any region under any governmental authority.

In Matthew 16, Jesus discusses with his disciples what people say about him. Many of the disciples answer, but Peter hits the home run after Jesus asks them the question, “Who do you say I am?” “You are the Messiah, the Son of the living God.” Peter answered.

Then Jesus pronounces a blessing on Peter when he tells him that “you are Peter, and on this rock (Peter actually means rock) I will build my church and the gates of Hades will not overcome it.”

The church is the bride of Christ and Jesus gave up His life for her. It will not be commandeered by distinct organizations and denominations. the church is not owned by man or is not a 501c3. It will be around long after the pope or Life church or Andy Stanley (don’t hate, I love the guy). And it has nothing to do with a building, though I understand the need and the desire for stability.

The church the way it was meant to be (meaning the people who are a part of it) is worth giving your life for because it was worth Jesus giving his life for.

I understand that a national and world treasure has been lost or certainly maimed by fire this last week, but know this: It’s just a building. A beautiful one but a building nonetheless. They come and go as do empires and cultures, but the people of God will always exist in all of their faults and human imperfections, their squabbles and their passion for Jesus.