I’m writing this post, from a specifically Christian context, and not as an American .  I thought I should start off with that in mind.

One of the key elements of Israel was the Temple.  Built by King Solomon using a plethora of materials his famous father accumulated from various countries, the Jewish  masterpiece was painstakingly crafted over a period of a few decades, and symbolically represented Jehovah’s reign over the people of Israel.  It was where they worshiped, sacrificed, and gathered, but it also showed the world proudly who the family of Abraham worshiped. 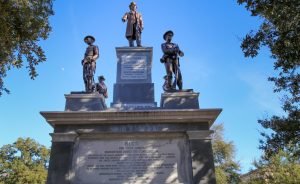 Of course in AD 70, the future emperor of Rome Titus, sieged Jerusalem, then marched in and completely obliterated, not only the city, but also the Temple.  The question that never really gets asked by people when pondering this epic event in Israeli history is whether or not Judaism or even Christianity continued as a result of the destruction of this city, the primary epicenter of Judaism and the birthplace of Christianity.  Since we are on this side of history, we know that both of these two world religions continue long after this point in history.  They continued because their merit did not hinge upon a building or even a symbol, but in a God who they presumed created and gave purpose to mankind.

A few weeks ago I traveled to Spain for the second time in three months, and I perused several cathedrals and monuments that represented historically great times of the middle age church.  Most of us would be thankful that these churches no longer have the power that they once did.  Indeed they were absolutely beautiful and I was thankful to have seen them, but there was nothing in them that made me desire to worship God any more or any less than my heart does now or did before.

Memories can be held in your head or transferred onto any number of papers or digital communication.  Beliefs can be written about and emanated from books, magazines, or online blogs like this one.

So frankly I just don’t understand the desire some Christians have to keep statues of Confederate soldiers.  One of the arguments for keeping them, and maybe the most significant one, is “We can’t just erase the bad parts of our history.”  I actually agree with that and to some extent agree with many of the conservative Americans who agree with that premise.  But as for Christians who make a case as a conservative instead of as a Christian, that’s where I have my problem.  You see, at some point, being a Patriot is not the same thing as being a Christian.  The Confederate soldier should have realized that, when they fought for a lot of things, but one thing (and it was a major thing) was the right to own slaves.  Before you counter that with the fact that it was only one issue out of several that the Confederacy fought for, like state’s rights and tariffs, remember that many evangelicals triumphantly supported their current president on his outspoken push against one issue – Abortion.  I wonder why we would fight so hard for the unborn, but fighting for one issue about the living in 1860 wouldn’t have been appropriate?  But I digress.

In 1 Corinthians 8, Paul addresses a division within the church.  A group of people started to eat meat that had been sacrificed by idols previously, but eventually sold in markets.  To those eating it was no big deal.  That was ancient history.  But others, who Paul called “weaker” but could also have been “newer” decided that eating the meat violated their conscience.  Paul responds in this way:  “But you must be careful so that your freedom does not cause others with a weaker conscience to stumble.  For i others see you – with your “superior knowledge”- eating in the temple of an idol, won’t they be encouraged to violate their conscience by eating food that has been offered to an idol?

There are two choices at play here.  Freedom and the past.  Part of Christianity is freeing yourself from the past so that you can now live free in Christ.  One group had come to believe in the risen Christ and found freedom  in that so much so that they could now walk into a pagan temple and purchase and eat and live in this new found freedom, knowing they were no longer in chains to those places or scenarios.  The other group still searched for that freedom and felt like their conscience was violated by eating that meat in those places.  Paul made it clear that neither was wrong, but finished this portion of his letter with this:  “So if what I eat causes another believer to sin, I will never eat meat again as long as I live- for I don’t want to cause another believer to stumble.”

Here’s all I’m asking if you’re a gun-toting, flag waving, patriot minded Christian.  Before you go out on a crusade and tell the whole world they’re stupid for wanting to rid the world of Confederate soldier statues, consider your brothers and sisters in Christ whose families  have been directly affected by slavery and segregation in the last 200 years.  Consider that perhaps slavery did cause families to live destitute and in squalor for generations.  Consider that the glorious memories of plantations and fields and lemonade and lunch on the porch with one’s Bible in their lap doesn’t mean as much to some as it does to you, because there were people in those fields who were mistreated, not paid, and in many cases abused in unmentionable ways.  And please consider, before answering as an American and not a Christian, that perhaps when certain believers in Jesus do see these statues, certain amounts of bitterness (stumbling?) trickles into their souls at a whole “Christian” society who many times used Scripture to defend slavery.  “So if what I look at causes another believer to sin, I will never look at another confederate soldier statue again as long as I live- for I don’t want to cause another believer to stumble.”

But certainly I’m not the only one thinking about this, right?  What do you think about it?