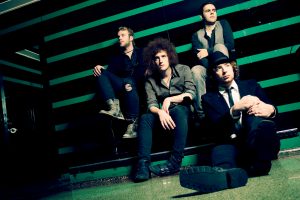 There’s a strange injustice in the music business. It is a cruel temptress. It doesn’t just break your heart, it builds you up. It gives you a false sense of security. It lets you think that you actually have a shot at being something. It makes you confident, and it feeds your identity. Dangles the carrot until you are starving. Just when you think you can finally take that bite..

It pulls the rug from under you. It makes you realize how powerless you are. Just a number. A pawn in a game to fill other people’s wallets. You worked and worked and are as good as you can be in that moment, and it’s not enough. Your life’s work. All of your experiences, thoughts, emotions, victories and failures up to that point are put into a project, and instead of being shared with the world, it’s damned to obscurity.

From roughly August 2010 to December 2010 we didn’t know our fate. We had no idea what was happening with us and our label. Honestly, we wanted out, but didn’t know what that meant. It had been 2 1/2 years of struggle and no progress. Writing new material was our solace, but it was difficult knowing it could be years before we could put it out. Then a few days after Christmas we got word. The new CEO had decided to cut ties with The Undeserving. At that point, it was a hallelujah.

Now there are things I understand about the business and how it related to our band. I understand that we weren’t the best thing ever. I understand that our record as a whole was probably only slightly better than average. I understand that the people who signed us and were passionate about us originally were gone and we were somewhat of a redheaded stepchild on the label. I understand those things. What I do not understand now, nor will I ever, is how a CEO, or whoever, can look at the amount of money that we brought back to the label, and think we weren’t at least a viable product. The record label spent roughly $150,000 on The Undeserving. We PAID IT BACK. We never released a record, or went on a big tour. We never played live on national tv. Never once did our songs get national radio play. But thanks to songs that lent themselves to TV placements, and one person at the label who knew what to do with them, we had enough income from roughly 15 TV placements that we paid back $150,000 of advance money. I don’t know this for sure, but it’s an educated guess that what we did is EXTREMELY rare. We recouped a 6 figure deal without ever putting out a product.

Now note the key words there. We “paid it back”. Record deals are not personal debt. But the way they are structured now the artist doesn’t make money until that advance money is paid back. That’s why it’s important to tour and generate income in other areas, which we had great difficulty doing without a record.  So while all this was going on, we never had a steady income, other than our part time jobs. We’d make money at shows every now and then, but the band had expenses. Our van, insurance, investing in merch, saving for more recordings, the list goes on. Paying ourselves was the occasional $50-$100. We were working essentially a near full time job for no money. This took a toll on us and our families. My wife Crystal sacrificed far more than I ever did. She was at home working a full time job and extra jobs on the side while I was galavanting around the US for no money. But she believed in us and our mission.

But now, we were off our label. The chances of us getting another deal was slim to none. There aren’t many second chances in this industry. Warner owned the rights to our record, and wasn’t about to give them up . We got a nice apology email from Kevin Law. It was over, so we thought.  We would put this experience behind us,  We would put the record out on our own and see what we could build. Sometime in March or April of 2011 Jon calls us. “Warner is keeping the record. I’m gonna fight like hell but at this point, it’s theirs, and you can’t legally release it”. I asked Jon about getting our lawyer on the phone to see if he could help in any way. “We can get him on the phone, for about $600”.

We had no money. No resources. Our friends and family had already bent over backwards to help us. This was our nightmare. We had heard these stories before we signed our deal, and we signed with Warner so what happened wouldn’t happen. I’ll never forget the feeling of despair at a band meeting. We were devastated, helpless, and out of options. I skipped college for this. This.. This was the music business. Not the glitz and glamour, tour busses and catering, private planes and tv performances. Those things were for the select few. This was real, and it was terrible.