The Fridge of the Knowledge of Good and Evil

Let me phrase this Biblically: In the decade of the nineties, while I was not yet twenty-five years old, and was still abiding within the basement of my ancestors, it seemed right to my parents and I that I should attend a Bible college.

That lasted for exactly one semester and was but one of several of my attempts at groping my way into something resembling a career. 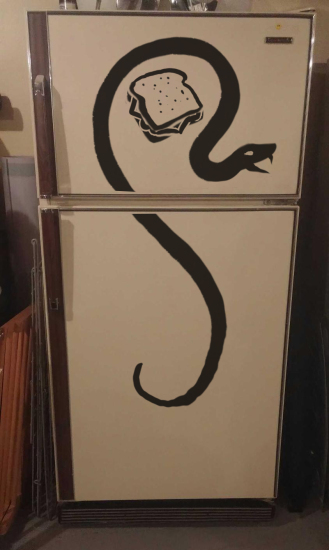 At the suggestion of a church friend, we found ourselves trekking to Rhode Island and a little Pentecostal compound called Zion Bible College.

It was a “faith school”, meaning you paid whatever money God “put on your heart” to pay.  During my time there, it seemed evident that God had put on most peoples’ hearts to pay about two bucks fifty, because the school was in a disastrous financial tailspin.

One of the repercussions of this was the cafeteria food. There were never seconds, and despite the food being objectively terrible (I made up my own Weird Al parody of “You Can’t Touch This” and we would often sing it in the cafeteria line: “I can’t eat this!”) on the rare occasion that seconds were allowed– on a first come, first served basis– the resulting stampede of hungry college students (myself definitely included) was both hilarious and tragic.

A sort of black market sprung up to compensate. A guy in my dorm had a mini fridge and for a nominal fee he would sell you anything from a wrapped single of American “cheese” (25¢) to a microwaved hotdog with bun ($1.25).

I got myself a job as a security guard at a hospital in nearby Providence. When my first paycheck finally came, two weeks later, I bummed a ride to McDonalds and bought three Big Macs.  And ate them.  And was full for the first time in what felt like years.

A little later I came to my senses and found a local grocery store. There, I stocked up on staples like lunch meat, cheeses, bread, condiments, chips, milk, soda. When I got back, heady with triumph, I was unpacking in my dorm and my roommate asked me, “Where are you going to put all that?”

My roommate’s name was Tom.  Tom was an affable, genuine, easy to like guy. He was looking at me with something like suspicious concern.

“I’ll stick it in the fridge down in the common room,” I said.

The common room was a basement with a sprung couch, a few old recliners, and cinder block walls covered in peeling, mint-green paint. There was a broken console TV and an antique communal fridge.

Tom just looked at me. He was a couple years older. This was not his first semester at Zion. “You can’t do that.”

“This is a Bible college. People won’t just steal my stuff.”

I put it all in the communal fridge, in an unmarked brown paper bag.

The next morning, my milk was gone. As was the meat, the cheeses, and the sodas. The only things left were what I had kept in my dorm room.

I ate dry cereal by the handful and fumed in perfect disbelief.

This was a BIBLE COLLEGE. Not just a Christian school. People didn’t come to Zion for a side of chapel with their Business Administration degree. They came to Zion to become pastors and church leaders. Right?

Next payday, I went to the grocery store again. I bought all the same stuff. This time, back in my dorm, Tom watched bemusedly as I wrote all over the brown paper bag. Big, thick letters in black Marks-A-Lot: THOU SHALL NOT STEAL! Treasures gained by wickedness do not profit! Nor thieves, nor swindlers will inherit the kingdom of God!

I felt good about this. I was not only righteously protecting my stuff, I was protecting the very souls of my weaker brothers from their waywardness, bringing them back by brute, shaming force onto the straight and narrow, saving them from the cursed downward spiral of perdition!

The next morning, the bag was the only thing left.

I tell this story because that experience reminded me of one essential, fundamental truth about Western religion, something I’ve tried to keep before me in the years since:  Christians can often be the very least reason to consider Christianity.

The church often seems cram-packed full of disproportionately more broken, hypocritical, deceitful, loud-mouthed, ignorant, combative, hateful, and just plain ugly-minded people than one might encounter in almost any other sphere.

And this should come as no surprise. The church attracts the people that know they’re screwed up.  People who think they have their crap together find little reason to turn to God. Thus, it might be considered a legitimate complaint for people to say of the church, “Why do I want any part in that?  Those people are a mess.”

Because it’s true.  Largely, they are.

And yet, fortunately, because they’ve turned to something bigger than them, they are also gradually less of a mess than they would have been otherwise.

That’s why my experience at Zion didn’t destroy my faith.  Because my faith isn’t in the people that carry God’s banner.  It’s in the God who insists on bestowing his banner on incredibly flawed people.

With that in mind, if I had one message for my Christian friends, it would be this: stop being surprised that everybody outside the church thinks the church is a bit of a joke– a support group for wackos, an echo-chamber of caricatures.  The awkward truth is: it sort of is.  And this is a good thing, because it means we’ve realized our failings and found the one place where we can have them addressed and remedied, over time, by the one that designed us.

And if I had one message for my non-church friends?  If you are waiting for the church to become attractive enough to join in, I’m afraid that ain’t never gonna happen.

There are churches of apparently beautiful, with-it, accomplished, successful people out there.  But I bet you can imagine the problem with that.  Those are churches of the theology of posturing, boot-straps, and self-help.  You can get that from Oprah, and she’s way better at it.

Instead of waiting for the church to get it’s act together, check out the God who’s willing to love and work with such a motley mess of half-broken, often embarrassing, sometimes even community-fridge-thieving losers.  A God who says “you don’t have to stop being a complete mess before you come to me.  You can’t do that on your own anyway.”

A God who loves people while they are still pretty damn unlovable to the rest of us.

Like the ones who hoarked down my ham and cheese, leaving nothing but a half jar of Stadium mustard, lid off, like the corpse of a murder victim.  It’s a good thing my faith wasn’t in other Christians, because I’d have tossed it then and there like a candy wrapper.

But that doesn’t mean I still don’t hold a vengeful grudge against that bunch of hypocritical, Bible-thumping nincompoops.

How do you go about putting your faith in Christ when his followers will consistently let you down?