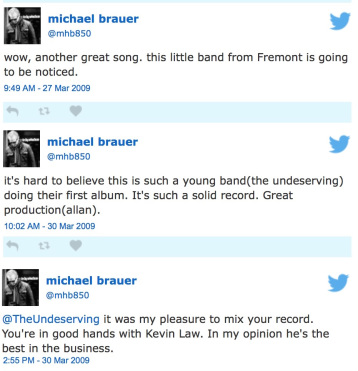 Momentum was building. Word was out in our community that we had signed a deal. Our little town of Fremont was behind us, and we had even done some local TV appearances in Toledo and Cleveland. Things looked like they were coming together, and people were excited for us, but behind the scenes, we had a huge question mark. Our record deal was up in the air, and with it being December, the industry had shut down for a month for the holidays. From November 2008-January 2009 we had no idea what the business side of our endeavor was going to look like. I wish the next part of the story was more interesting, but it’s not. Sometime in January 2009, after two months of ambiguity, we found out that Warner Brothers was going to pick up Cause For Alarm’s half of the contract. None of us remember the details all that well, but we found out we were 100% a Warner Brothers recording artist, and after some paperwork, we were clear to send the now completed record on to mixing.

Mixing our record was literally one of the highlights of my life. Only twice did I ever feel like we had the power of a major label behind us. The first was the last few songs we recorded, which was 3 weeks straight in Nashville with a full budget. And the second was mixing. Mixing the record just means you take everything you’ve recorded, and a mixing engineer makes it sound way better than when it was recorded. Kevin Law was technically still involved with us in some executive capacity, and he was friends with Michael Brauer, who is one of the most sought after mixing engineers in the world. Michael works out of Electric Lady Studios in NYC, built by Jimi Hendrix. Michael cut us a great deal because he knew Kevin, and the label was on board, so in March of 2009 we went off to NYC for ten days to work with one of the best in the world.

If you want to know what intimidation feels like, try walking into a studio where there are platinum Coldplay records on the wall. Where the walls themselves wreak of music history and legends. Where you run into big stars in the hallways. A place where movies have been filmed, and the best of the best have recorded. Again we felt in over our heads. All of this money spent on us. Could we deliver? Were our songs actually that good? They say art is found in the overlap of complete narcissism and crippling self doubt. Well, both of those emotions hit us hard that week. 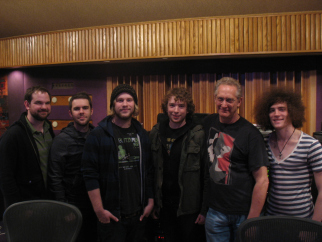 We went into studio 2 where Michael is set up. Michael Brauer is a total New Yorker. He made an art form out of swearing. He was kind and generous, and also yelled at Brennan for bringing that “****ing smelly Subway ****ing sub sandwich back in his studio.” Then he ordered us pizza. We were pulling 2 songs a day to get done, and Michael worked his butt off, even through a day where the console went down, and we didn’t get started till after 9pm, and finished after 2am, then were back at it by 10am. For this we were so thankful. We learned how to be pros during this trip. We came home from New York and got ready to get back on the road, this time our biggest tour ever, with a band called Secondhand Serenade. We played 9 shows in 10 days if I remember correctly, all in theaters or large clubs. There was actual catering. People came. It was something. Now these blogs may make it seem like all of this was happening fast, but remember we started recording this album in 2006. By 2009, the record is in post production, but we’d been working on it for 3 YEARS. A few of the earlier songs written for the record, like “There for You”, were 5 years old. For the most part, we were sick of these songs by now, and were still waiting on Warner to give us a release date. So we’re out on the road, playing for $100 a night, which isn’t enough to cover gas, so we rely on merchandise sales to help. The problem was, no one wants a tee shirt from a band when they don’t yet have their music. This was 2009, and people still actually paid for music back then. So not having it to sell was really difficult. We came back from that tour $70 in the red + the work we missed at home. Oddly enough, we spent $70 of band money at Outback steakhouse one night. Figures. We got home from tour in April, and started the waiting game. 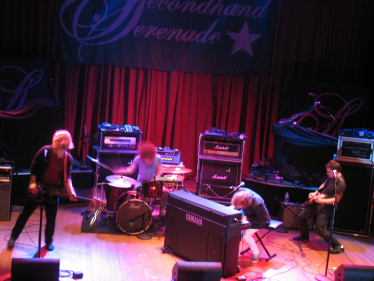 3 of the 4 of us kept our regular day jobs during this time. We all had bills to pay, and even while on the label, there’s no consistent income. We all shared in some humbling experiences. There’s something about running into a fan who wants to hear about everything you’re doing while you’re working at Big Lots stocking the feminine products. I remember working at a dog food packaging plant for a short time during all this. We’d hear Tom Petty on the radio and I’d joke “there’s my label mate Tom”. Not sure anyone believed me. I’m not sure I believed me. I also worked for my church of 1500 people. The questions were constant, and though I loved the attention, basically lying to people to keep their interest got old. The truth was we didn’t know what was happening.

The  late spring and summer of 2009 are a somewhat of a mystery to me. I don’t have any journal entries, photos or videos. I know we played some shows and stayed sharp, and wrote some songs. You see, through all of this there was some sort of disagreement between Kevin Law and Warner Brothers. To be honest, I have no idea what it was. Probably money. We stopped hearing from Kevin during this time, and our manager Jon just tried to keep us in the loop. I remember feeling more and more hopeless, like we would never get a release date for our record. We also had little to no contact with anyone from Warner Brothers. Were we still on the label? Technically yes but it sure didn’t feel like it. All we ever heard was we needed to be on the road more. This was going to be difficult without a record to push but we went and met with a big booking agency anyway. They basically told us they wouldn’t help us out until our label made up their mind. So label says play more shows, that will get ball moving, booking agency says, we’ll get you shows when your label makes up it’s mind. We felt handcuffed, unable to do anything with the art that WE MADE. Completely stuck. Until that September, when we got a phone call. “We’re going to LA to showcase for the CEO of Warner Brothers”.