If you were to open N.T. Wright‘s first book from his magnum opus series, “The New Testament and the People of God“, you would find the first 300 pages or so an instruction manual on how he reads and studies the scripture in 3 parts.  He explains in great academic detail that he reads the Bible as Theology, History, and Literature.  Ignoring any of these disciplines as one studies leaves the student with an incomplete picture of God’s word and the context in which it was written.

With this in mind, the reader of Wright’s biography on one of the most important and influential followers of Jesus is in for a deep and intense look at not only what Paul wrote to the churches, but why he wrote and acted as he did, and by those actions and writings, why his work spread throughout the Roman empire and beyond, effectively changing the world and it’s direction.  The book is a drink of water to anyone tired of normal modern understandings of the Apostle focused more on proving an enlightenment based systematic theology. It is an ode detailing the kinds of problems, solutions, and teachings, the great evangelist and church planter communicated to those small groups of believers he introduced to Jesus.  “I believe that in our diligent searching of the scriptures we were looking for correct biblical answers to medieval questions.” Wright says as he gets down to the business of sharing the life of Paul with his readers.

What makes the author so capable of telling the story of Paul in the first place is his understanding of first century Judaism.  Not just in this book, but in 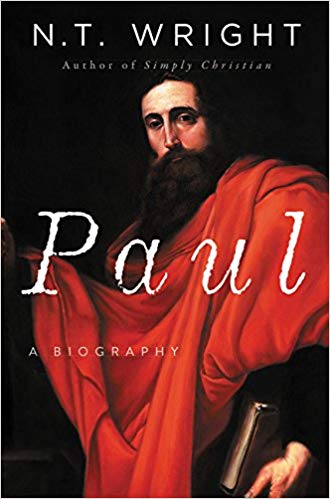 many if not all of his books written at least in the last 20 years, Wright seamlessly describes the people, cultures, and customs in the Bible as if they were his people.  He does this using Scripture yes, but also the tools of the Apocrypha, secular and church father historians, and other literature from the time period in question.

I would do the book a disservice to review the life of Paul here, as I recommend heartily the book and the way Wright tells Paul’s story, but I will share with you one of my favorite parts of what I read, and that is, what Wright views as the marks of the communities Paul created.  For the book opens with these questions:  “How did he come to be a world changer?  He was, we may suppose, a surprising candidate for such a role.  He was a teacher of Jewish traditions, perhaps;  a reformer, quite possibly.  But not the kind of activist who establishes in city after city little cells of unlikely people, many of them non-Jewish, and fires them with a joyful hope that binds them together.  Not the kind of philosopher who teaches people not just new thoughts, but a whole new way of thinking.  Not the kind of spiritual master who rethinks prayer itself from the ground up.  How did it happen? And, beyond the initial impact, why was Paul’s movement so successful?  Why did these little communities founded by a wandering Jew turn into what became “the church”?

N.T. Wright answers these questions and more in a fine biographical sketch on the apostle Paul that any student of Scripture should read.  It is not an easy read, and if one prefers popular Christian self-help, this one’s not for you.  Deep and thick with Paul’s theology and history, and connecting those arts with his knowledge of the Old Testament, this book promises to be not only a “good read” but also a teaching tool for anyone interested in knowing more about Paul and his writings that shaped the direction of Christianity and the world for at least another 2000 years.

As promised, and specifically because I know this bit of information will be helpful to those who read the Holman Report, Wright closes his biography on Paul by sharing a few marks of the communities he started and discipled.  The first two rarely coexist in our modern society at this point in the history of the church.  Unity and holiness are two of the most important aspects of the first century church as Wright sees it.  This may seem a harsh criticism and I’m open to being wrong, but many churches dabble in unity and focus in on connecting with the bride of Christ, but holiness seems to be of little consequence to them.  Conversely churches that claim to center around holiness also like to “separate themselves from the evils of ecumenicalism”.  Wright however claims that these two marks of early church communities could not be separated.

Another mark of the early church was that they were outward reaching.  Please excuse me if I differentiate this mark with today’s idea of outward reaching.  The early church had no concept of helicopter easter egg drops or bringing five friends for the chance to win an X-Box.  Their version of reaching out focused on the mantra “Remember the poor”.  And in everything that’s what they did.  In fact, they were so influential, even in the face of terrible suffering and persecution, in healing, medicines, and taking care of those in need, that by the 3rd century, Rome had no choice but to allow them to worship freely as opposed to attempting to kill them off for their faith.

This leads us to another mark of the early church and that is humility and suffering.  Admittedly this tends to be a difficult idea even for me, that humbly accepting how one suffers somehow brings glory to the person of Jesus, but throughout scripture, and particularly in Paul’s writings we see how this plays out.  I see how this could be a great conversation amongst the church, as we move into a new era of trying to break free from the trap of “trying to be like the world.”  Of course Paul tells the church in Rome to “be transformed by the renewing of your mind.”  I would like to say this, because I think it’s relevant.  If you believe you are being persecuted because you aren’t allowed to call someone else’s lifestyle a “sin”, and consequently you get banned from Facebook (as an illustration)you should probably reevaluate your definition of persecution.  Paul and his fellow followers of Jesus were being imprisoned, beaten, and killed for their beliefs, so please be careful when you paint yourself as a victim.  Thanks.

Kyrios was the Greek word for Lord, and it was one of the titles of Rome’s number one citizen, the emperor.  So when Paul and the others disciples wrote in their stories and letters that there was a new Kyrios or Lord, they weren’t making cool bumper stickers, but they were subverting the Roman government and essentially making a new mark of their little Jesus communities – Jesus is the real Kyrios.  Today, yes, there are those who believe that our government is the real Kyrios of America, but I wonder if the church has a new Savior to whom we’ve slowly bowed down.

Please give this book a chance if you love the church and desire to see God’s kingdom advance.  But as I finish, I’d love to ask you this:  Has materialism become the new Kyrios and Savior of the church?  If not, do you see a Kyrios other than Jesus over God’s people?  What do you think?