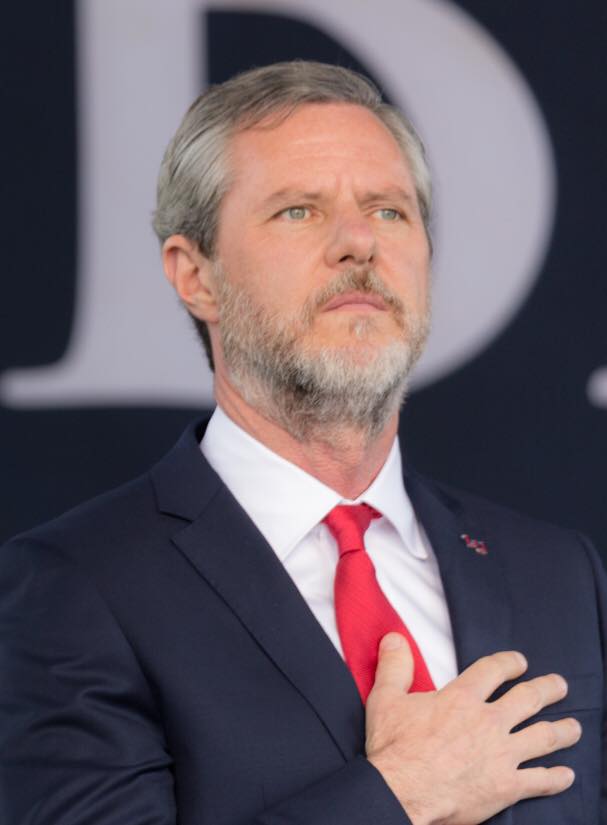 It happened again. Last night a friend of mine sent me another article about another dogmatic evangelical Christian leader engaged in a current events controversy. In 2015 Jerry Falwell Jr allegedly asked Trump fixer Michael Cohen for a personal favor. Falwell said someone had come into possession of some racy “personal
Photographs – “the sort that would typically be kept between husband and wife”, Cohen said in a taped personal conversation.

The rest seems to be evangelical history as Falwell unexplainably (before now) changed support for the 2016 Presidential election from Ted Cruz to Donald Trump at an opportune time in the primaries, paving the way for the 45th president to win the primaries and go on to defeat Hillary Rodman Clinton in the November elections.

I remember feeling how the support of Falwell just felt so forced as the he came out in a strong, unapologetic way and shocked Liberty’s students and alumni, many of whom have bid their own support of their alma mater goodbye. There was an even an ill advised photo “opp” the two men took together along with Falwell’s wife as he announced his support for the presidential candidate standing in front of various magazines which Trump donned the covers, the most famous being Playboy. It’s not a stretch to say that people’s eyebrows raised when the photo hit social media.

The greater question seems to be were these events coming out publicly now related to Falwell’s staunch stance of support for the man who would become president? And did that favor somehow translate to the shock so many of us had at this support? I know personally, I couldn’t believe the change. Falwell came out so strongly for the famous candidate who told us numerous times he loved God, but lived a life quite different from his words, that I felt we were all being given a Jedi mind trick.

Years ago, Pastor Ted Haggard of New Life Church in Colorado, and president of the National Association of Evangelicals from 2003 to 2006, publicly called out the homosexual movement quickly gaining traction throughout the United States, and advocated against its legalization. During this time, news came out that Haggard had been seeing a male prostitute/masseur and paying him for sex for three years. Haggard was forced out of his church, signing a paper that he would never step foot there again, and now pastors St. James Church in Colorado Springs.

The problem is not that people are making money. Everyone should be able to work and earn a liveable wage. The problem comes when that money becomes tied in with the motives behind what those in power are saying. Say what you will about Hollywood, but many of those actors who speak their mind politically did so before it became popular to do so, and usually took heat because of it. And when a famous pastor or musical artist goes against the status quo of the evangelical world (see Rob Bell or Gungor), you can bet they’ll get painted as reprobates who hate God.

But why did Falwell Jr. Go gung ho with guns a blazin’ for Presidential Candidate Donald Trump? Why did Ted Haggard come out as a leading opponent of legislation legalizing same sex marriage in the United States when he had been practicing homosexuality for years? Why am I just now writing the things I’m writing for the Holman Report, despite the fact that I’ve believed them since the mid 2000’s?

As a matter of fact, if God is so all powerful like Falwell or Haggard or me or any number of evangelical pastors say, then why do Christians need legislation and political influence at all?

After thinking through some of these issues, here are 4 reasons why the American church needs these things, and they are not good:

Recently one of my favorite pastors, Andy Stanley, wrote a somewhat controversial book called “Irresistible” and spoke a message series on it where he suggested we “unhitch the Jewish Scriptures from our New Testament faith”. As a quote taken out of context, it’s absurd, and I think Stanley would say the same thing, but he was preaching through Acts 15 where Peter and James were confronted with the idea of whether or not the commandments in the Jewish law needed to be adhered to by Gentile believers. To be honest, many of us benefit from this conversation every time we eat meat amongst other things. Also, I’ve heard Stanley use the Old Testament Scriptures in at least 100 of his messages. So what was his actual argument.

Stanley essentially argued against using the Old Testament as a means to teach doctrine, and instead insists that it would be better to use it to share the authoritative story of God. In other words, many evangelicals today use the Old Testament to justify church governance, argue against the evils of interracial marriage, and to fight for the US continuing to be a “Christian nation.”

The United States was never supposed to be a Christian nation. It was supposed to be a free nation. Christianity rose and grew in the midst of a tyrannical, materialistic, depraved empire, and its decline in the midst of all this freedom. I don’t think it has declined because of the freedom, but rather, its decline is due in no small part to bad doctrine and Christian practice. Frankly, our present church hierarchal structures show a full plate of bad doctrine compared to the communities and even leadership that Acts teaches. And as long as we continue to use the OT for a platform to teach Christian doctrine, we will continue to make a mess of the church.

We discussed this earlier, but it’s worth repeating. As long as the American church relies on money, not only to survive as individuals but to run as an organization, there will be people who strive for political power and influence, which will naturally corrupt the church as a whole. I know earlier I talked about Falwell and Haggard and even me, but the truth is as long as 50% of any church’s budget is staffing, there will be motive issues within the church.

Think through this with me. Jesus had no money, no “tribe”, no familial influence to speak of that anyone knew (later on of course Matthew and Luke wrote out his family tree), a famous cousin that people followed, but who did not initially campaign for him, yet people followed, learned, grew, rejected, and eventually crucified him. He lived because his Father Called him to live. His father took care of him.

His followers were not much different in Acts. They followed him for years, so they knew what to do and how to teach the ways of Jesus. When confronted with financial blessings, they gave it away or rejected it altogether. All of them were martyred because of the paths they chose. Will God take care of you or not? They believed he would.

One of the most misunderstood gifts in the NT is the prophet. Somehow we have merged the pastoral role with the prophet role, allowing pastors to run amok and do whatever they want to within the context of their post. And when they eventually get influence, God help us. They listen to no one who is available to correct them because they become the mouthpiece of God, and anyone who speaks against them is “divisive.”

When the church is at its best, others are coming alongside of the pastor and the teacher and the evangelist and the apostle and speaking out things that don’t seem right. These prophets are usually outspoken in a small group context, and are able to see things that most cannot. They are sensitive to God in ways that other members of the body are not.

In truth, they irritate me:-). But I know that in order for the church to grow and flourish accordingly, the truths they impart must be heard and not overlooked.

Listen, Haggard and Falwell aren’t being prophetic when they speak out against same sex marriage or promote Donald Trump as the next president. I know this because of the fruit. As a church we must start listening to the prophets among us, whether or not our church leaderships will.

I believe this about many Christian leaders who take an extreme stance on political issues within the US. There is a general lack of humility with Christians in powerful positions. This is not always true of course, but it can be and once again, this eventually comes out.

Boldness is so important in spreading the gospel, but Christian boldness must be rooted in love and not power, and spread by humility and not elections.

I’ve written a lot here, and my prayer is that if you are a Christian in the wilderness, you will consider these things and begin to ask yourself, “How can I share the good news of Jesus and influence people in a way that is natural, full of the fruit of the Spirit, and devoid of superficial self-serving motives that spread a false type of godliness, but in the end create as big of a hole inside the human heart as any other type of self deceit?”